I was at Michael's crafts a few days ago, and was looking through the dollar section~ I really do believe they have some of the best dollar things I've ever seen! I found these adorable little ornaments. Or at least what I thought were ornaments. Upon looking more closely, I realized that they were actually place card holders that looked like ornaments...and then I thought of how much fun it would be to use them a wee bit differently than they'd intended! :) I could spell a word, putting each letter into a place card holder. 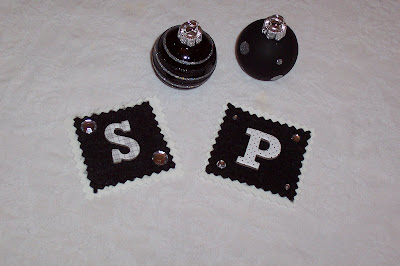 I just needed to think of a word with a Halloween theme. All that was coming to mind was the word "Boo", but I'd already done that. I thought of "Scary", but that didn't seem quite right...Then I was visiting one of my favorite blogs, At Home In Georgia, and saw her new header. She used the word "Spooky" above her fireplace in a very ingenious way...and I knew I had the word I was looking for! I hope she doesn't mind me borrowing it for my project! :) 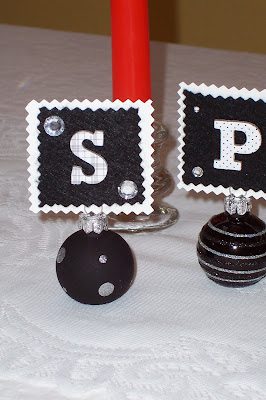 I just used my pinking shears to cut little squares out of white card stock paper, then used them again to make black felt squares to stick onto the white squares. (I used these adhesive dots I had on hand.) I used some black and white adhesive letters I'd found in the scrapbook section, and then of course it needed some little gems to make them "pop". :) 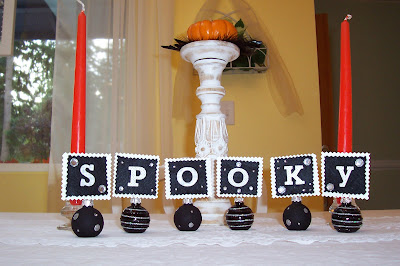 I slid the letters in, and that was that! Easy as pie! :) 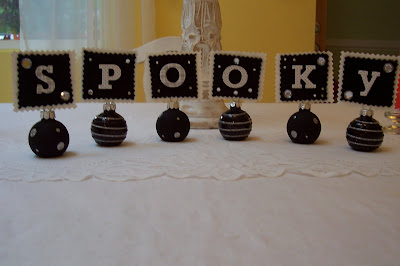 This is a closer view, but it isn't as sharp of a picture! :) After I had it all together, I had a moment of insecurity and thought it might look a bit odd, like all the planets lined up in a row! But I think I'm past that now, and am just trying to decide where I was it to "end up" for the rest of the season! :)

I fixed up my "all year wreath" for Halloween, but I can't promise it won't be further tweaked! :) 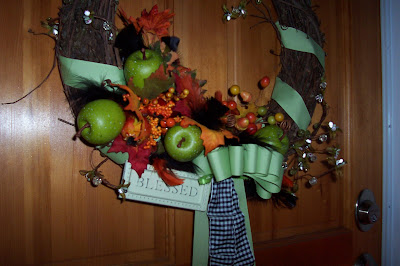 I also changed things around on the porch, and added some details. I will try to show you those pictures tomorrow for sure! :)

Oh, and I wanted to say that if you don't see my comments on your blogs, it's not because I'm not visiting! My laptop is not letting me to any comment pages (not even my own!). I don't know why it's doing this, but my husband is going to look into it! I am glad to have our other computer, or else I'd never be able to say hi to you! But the laptop is what I use at night, and that's when I have the most time to visit! So, I can read about what you are up to, but I JUST CAN'T COMMENT! It's TERRIBLE! :) Well, anyway, we'll figure it out, but until then, I just wanted you to know this! :) I hope you had a fantastic weekend! :)

Those turned out really cute!!! Love your wreath too! You are getting all spook-ied up!!

eek...I loved those ornaments you found. You had such a good idea with those. Hey I just got the idea out of a catalog. So how was that homemade lemon cake you made a few weeks ago?

That is so very cute! I love how you did that! So fun!
Happy Monday!
-Sandy Toes

Fabulous idea! I think I will take a trip over to Michael's this week!!! Hope your computer troubles are fixed soon!

I am so glad the chicken turned out!
-Sandy Toes

I think they turned out so good!

Love it! You've got me thinking I could use Christmas tree bulbs as placecard holders for a dinner event. Too cool! = )

Check my blog out on Tuesday...there is SOMETHING FOR YOU!
-Sandy Toes

What a super idea with the ornaments!