...make up this post! First off, I wanted to say thank you all SO much for your kind comments and prayers concerning our cat Lillie! I meant to mention her last night, but had like two seconds to write, and forgot. (Isn't that a terrible cat-mommie thing to do? I feel really badly about that.) I haven't stopped thinking and worrying about her, though. Because, no, we are still hoping and praying that she will come home. What concerns me most is that the neighbors haven't seen her around. Lillie and Max tend to stay around our neighborhood. I have been running through possible scenarios and coming up rather clueless. She had both a collar and a little ID thing attached to it, with her name and our number. Wouldn't someone call if they found her, or even if, God forbid, she was hit by a car? I am trying to be hopeful, even though it has been exactly one week since we last saw her. Thank you again for all of your prayers! I was truly so touched by all of your comments! I put another picture of her and Max on here~ I hope you don't mind. This one is funny to me because although you can barely see it, they were actually trying to cuddle up to our other cat, who was NOT pleased with our choice to adopt them. He was so unhappy in fact, that he eventually ran away, as I mentioned before. It was very sad. :( 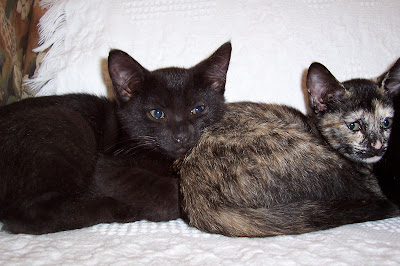 Well, after that morbid, depressing discussion, I DID do something a little fun, and made this mini banner. I am going to attach it on my wreath on the front door. I will make sure to show a picture of it, hopefully tomorrow! Of course, this banner had to say "Boo"! I couldn't help myself! :) It was so easy to do, too! 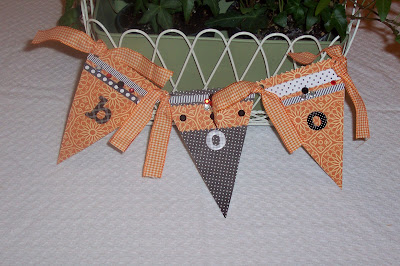 For some reason, I was having trouble getting a clear image, maybe because it's at night!
I also realized you can't see the details on the middle letter as well, so here's another picture of it! 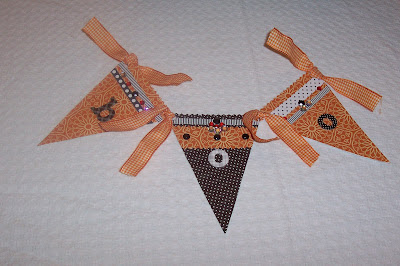 My sister asked in her comment whether I made it with paper or fabric. I made mine with paper. I don't know how other people make theirs, but I just drew my triangle shape onto some white cardstock paper (thick paper used for card making, etc.) and then used that as a pattern to cut out whatever scrapbook paper I wanted. Then I just glued the scrapbook triangle to the cardstock triangle. Then you add your letter to the triangle, and whatever embellishments you desire! I had fun by adding the adhesive decorative ribbon, so much easier to work with than ordinary ribbon, and adhesive sparkly gems. These can be found at Michaels, or I am sure any craft store really! Okay, and I admit, I am officially addicted to these adhesive things! The sticky-back letters, gems, ribbon~ I mean, how smart is that? And while we are on this subject of cool things, did you know they actually have spray glue? Now you probably all already knew this, but I never said I was the brightest crayon in the box! I was just shopping at Michaels and thinking to myself that what would be perfect is if they had such a thing as spray glue, and an employee there told me that there is such a thing! So I won't be making my fortune in marketing spray glue after all. Oh, well. Perhaps I can just settle for making my craft creating more simple! :)

I didn't want to forget to say a few things...first, I want to say thank you to everyone who joined in on the "Fall Cooking Fest" I held on my blog last month. I know it's coming to you super late, but I hope you know I really appreciated it! I now have some good recipes to try, and hope you do too!

Second of all, I haven't forgotten to pass on a few awards I have been given. I will be doing this very soon! I am so honored and touched to have been given them, and frankly, quite surprised that anyone even reads what I write here! :)

And last, if you're still here, I am SO sorry that I have been such a terrible blogger friend! I should be able to have some good blog time tomorrow, and plan to catch up on you all! I can't wait to see what you have been up to, you all just amaze me with what you do and say! :)
I hope you had a good Monday! One down, four to go, right? :)

Hi Jenni! So sorry your fur baby has not come back. Sighhh. Could you put some flyers up? I love your banner...lovely colors you chose. Are you using the Xyron machine for adhesive? I love mine...makes stickers and you and even do fabric with it. I love spray adhesive too..I use that mainly for recovering lampshades. I will keep praying for kitty. Hugs, cherry

Oh, I just knew your fur baby would be home by now. I am still hoping and praying that she returns.

Your boo banner is so CUTE...great Job!!!

To answer your question about what I used for the scarecrow head....I use something called smoothfoam. In Hobby Lobby it is next to the regular styrofoam in packages hanging on the wall. The paint easily goes on this unlike regular styrofoam.

One more thing....stop by my blog you have been BOO-ed!!♥

Your banner is very cute!!!

Aw, I'm sorry she still hasn't made her way back home yet. :(

Hi Jenni! Thanks for stopping by my blog and leaving your sweet comment. :) Im so sorry about your kitty :( Maybe shes out playing and having a great adventure and will be home soon!
I love your banner you made, it is so adorable. One of the things I really want to get more into is crafting. And I love the pumpkins on the candle holders in your earlier post! How creative and fun! I love fall!
Have a great day!

I am so sorry that your kitty is still M.I.A.
On a happier note...spray glue is awesome! Your banner is so cute! You are quite the craft critter!

So sorry about your kitty! I was going to boo you but I see you have already been booed!

I have heard of Sara Groves. I'll have to look up that song you were talking about.

So sorry about your kitty. I know it's terribly worrisome and sad. We're all pulling for her to come home! On a happy note to leave you smiling~ your banners are adorable hun! Love them! Want them!!! Happy Tuesday~ Les

Hi Jenni - I'm sorry our kitty hasn't made her way home yet. Do you think she might be at the animal shelter maybe? You could call & just tell ask if they've seen her, then they'd be on the lookout for her. I really like your banner and thanks for telling how you made it. I'm thinking of making one for Thanksgiving. :) Have a great day!

Hi Jenni,
I do still hope your little kitty comes back!

The banner you made is adoraboo!
I've got to get busy myself and get to crafting again-The holidays are creeping up on us!

I love spray glue and did you know there is also spray glitter? True story~!
Take Care,
Robin~♥