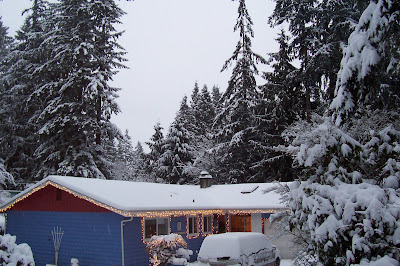 I hope you all had a wonderful weekend! We had about a half a foot of snow fall last night, and guess what? It's been snowing most of the day, and they say we could get up to eight inches more before morning! (I am just as excited as the kids, maybe even more!) I just love snow!
We are all praying/hoping for a "White Christmas", just like the ones we've rarely known! ;) 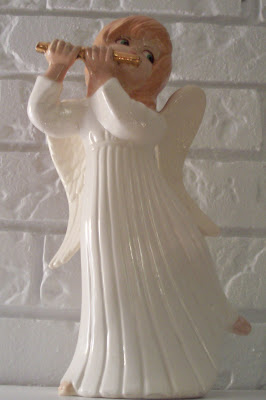 Today is the fourth Sunday of Advent, and the fifth and last candle will be lit on Christmas Day. This Sunday we light the Angels' candle, and we remember the night the heavenly choir sang to some unsuspecting shepherds. I think I've become so used to hearing about these angels, that I'm not a bit frightened when I hear this story. But the shepherds were, and I would have been too in their place. How often do we catch a glimpse of such things that usually remain unseen? Maybe once, or never at all...do you ever wonder what the angels thought, watching this plan of God's unfold? It must have seemed so amazing to them, maybe even as amazing to them as to those shepherds on the hill who heard their song...


Suddenly a great company of the heavenly host appeared with the angel, praising God and saying, "Glory to God in the highest, and on earth peace to men on whom his favor rests." When the angels had left them and gone into heaven, the shepherds said to one another, "Let's go to Bethlehem and see this thing that has happened, which the Lord has told us about."
~Luke 2: 13-15 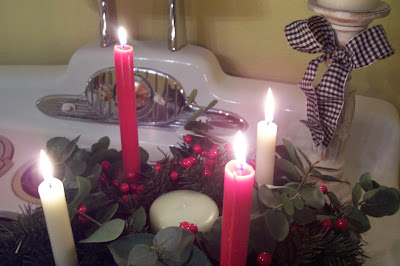 It Came Upon A Midnight Clear
It came upon the midnight clear,
That glorious song of old,
From angels bending near the earth,
To touch their harps of gold:
"Peace on the earth,
goodwill to men,
From heaven's all gracious King":
The world in solemn stillness lay,
To hear the angels sing.

Still through the cloven skies they come,
With peaceful wings unfurled,
And still their heavenly music floats
O'er all the weary world:
Above its sad and lonely plains
They bend on hovering wing:
And ever o'er its Babel sounds
The blessed angels sing.

And ye, beneath life's crushing load,
Whose forms are bending low,
Who toil along the climbing way
With painful steps and slow,
Look now! for glad and golden hours
Come swiftly on the wing:
O rest beside the weary road,
And hear the angels sing.

Just looking at your snowy picture gave me a cold chill. I hope you and the kids have a blast sledding all week long!

Take care, have a super sledding week and Merry Christmas!!!

Brrrrrrr and maybe 8 more inches???!!! It is GORGEOUS and I do hope you get a white Christmas!

I LOVE that song....it is just so beautiful!

What fun to get all of that snow! Merry Christmas to you - and I hope you get your wish of a white one! :)

I want to wish you and your family a very Merry Christmas and a Blessed New Year!!