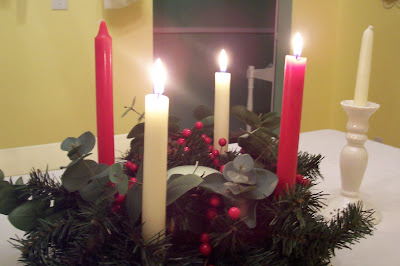 This is the third Sunday of Advent, and so we light the Shepherd's Candle. I love that the shepherds get their own candle! Our previous pastor called these these particular shepherds "the nightshift shepherds", those who were the lowest of the low shepherds assigned the worst work shift. I just love that God chose to send an angel choir to them, and give them the opportunity to see the baby Jesus! :) It reminds me that God gives every one of us, no matter who we are, this same opportunity to know Him!

Verse for the Shepherd's Candle:

And there were shepherds living out in the fields nearby, keeping watch over their flocks at night. And angel of the Lord appeared to them, and the glory of the Lord shone around them, and they were terrified. But the angel said to them, "Do not be afraid. I bring you good news of great joy that will be for all the people. Today in the town of David a Savior has been born to you; he is Christ the Lord. This will be a sign to you: You will find a baby wrapped in cloths and lying in a manger." Suddenly a great company of the heavenly host appeared with the angel, praising God and saying, "Glory to God in the highest, and on earth peace to men on whom his favor rests." ~Luke 2:8-14

The first Noel the angels did say
Was to certain poor shepherds
in fields as they lay;
In fields where they
lay keeping their sheep,
On a cold winter's night
that was so deep.

They looked up and saw a star
Shining in the east
beyond them far,
And to the earth it gave great light,
And so it continued
both day and night.

That is one of my favorite Christmas songs!

I love this post Jenni. Very touching and true!
I love that Christmas song too. Our baby granddaughter who will be here SOON is named Noel Grace~♥

So pretty and peaceful :) Hope you have a wonderful week!

What a wonderful tradition! I wanted to start something just like this, but couldn't get my act together in time this Christmas with the Bubonic Plague and all. Next Christmas for sure!!!

Can you believe it is this close to Christmas?!!! What a neat thing to make.