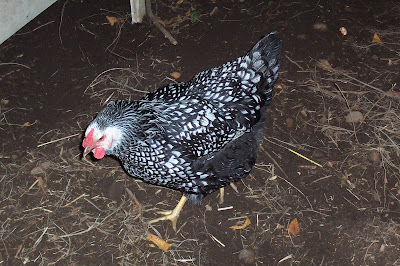 I've been outsmarted...by hens! Now what does this say about me? You see, my good friend next door and I do "trades". Kind of like a really down-scaled version of Trading Spaces. (No, just kidding!) But we DO trade jobs sometimes, because she isn't afraid of heights, which explains why she is on a ladder painting MY house peaks. I like to paint walls, so I helped her with her son's room. So...to make a long story short, I am trying to wrap up painting their hen house. And at the rate I am going, it may be next spring before it's completed!

Lately, I've been working on the door to the hen house, which means I have to get the hens from their larger roaming area into the closed off part where they actually have their laying nests. This is not as easy as it sounds. The first time, I think they were caught by surprise, because it went quite well. I just mimicked what my friend's daughter showed me, making sure to hold their wings down so that their wings didn't flap about. (Making it almost impossible to hold them.) I was so proud of myself! It turned out to be beginner's luck, though, because the next time proved more difficult! I had two down, one to go. But that one was sneaky. 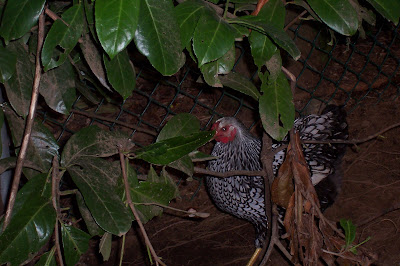 She would hide behind this bush, and if I came one way, she'd go the other! Then she'd hide underneath the rabbits' cage, knowing full well I couldn't catch it there. Now, in truth, it does seem rather far-fetched that a grown woman could be outwitted by a little animal, but whether it was my being outwitted, my timidity, or a combination of both, I eventually just gave up and painted the door with one eye on that hen. I could not imagine attempting to catch it if it got loose! 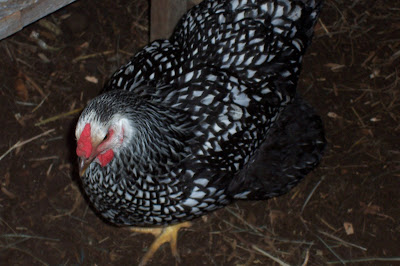 I vowed that next time, I would not be caught off guard. No more painting while looking over my shoulder! Oh, well. It was a nice thought. But Sneaky Hen must have told Quick Learner how to evade me, because this time I was only able to catch one of them. Now it's a fact they all look alike, but I think this particular hen~ I call her Nice Chicken~ is the same one that actually comes when you call it like you would a cat. But somehow "Here chicken, chicken, chicken!" just doesn't sound the same! :) 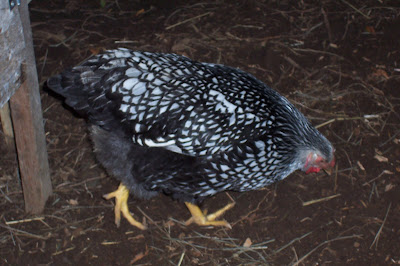 Now at least I am finished with the door, so there will be no more hen catching for me!
I did learn a couple of things from this experience, though. First, hens are not, and I repeat not, photogenic! They have no interest whatsoever in posing for pictures (ha!), so these were the best I could do! :) The second thing I learned is that whoever coined the phrase "birdbrain" has not met these hens! But oh well, all's well that ends well, right? :)

Oh, I didn't want to forget to ask you what you think of my new blog design. It really is so much more "me", and makes me smile every time I see it! Amber from Shabbee Chick Designs is awesome! She does such a wonderful job! If you need/want a great blog makeover, don't hesitate to head over to her website! :) Her logo link is at the bottom of the left sidebar.

Well, worn out from all my popcorn ceiling-scraping, mommy-giving, hen-chasing activities of the day, I must close! I hope it is a peaceful night for everyone! :)

I think you did a great photo shoot on the chicken...lol. Your story is funny...I am glad you got everything painted. How neat to trade out jobs with your neighbor.

I LOVE your new blog look....it is really cute!!

To answer you question I got the pumpkin pole man at Cracker Barrel and he was 25% off making him around $22.00. I LOVED him and HAD to have him...I think I would have paid full price.....

I was thinking of getting chickens in the spring. Maybe not!!!!! I love your new blog template. I have got to get my rear in gear and get a professional to help me with mine!!

The new blog is so happy and fun! The aqua blue is so pretty and fresh! I am cracking up at the chicken story and can just picture it now! Hugs, Les

That is funny. I like the new look...it's retro kitcheny to me.

I really like your new blog look - very cheerful. And what a cute story about the chicken! :)

You are crackin me up with the hens....nuttin like fresh eggs though. I can't believe your neighbors and you share chores ...that is cool. Love the new blog look. I really wish I had not gone black...live and learn. cherry