When he buys you work gloves! I'm actually serious about this! (I realize it sounds terrible, but I'll explain...)

We were at Home Depot and I saw these cute pink work gloves. I had been wanting some for a while, because his are too big for my hands, but sometimes these gloves really come in handy when you are fixing up an old house! :) I mentioned to him that the next time he was going to buy me flowers, that he could get me some gloves instead because that would be such a great gift! He thought I was joking, but realized I was serious. So now I have these gloves and I can't wait until I have a need to use them. Which in this house, won't be long! :) 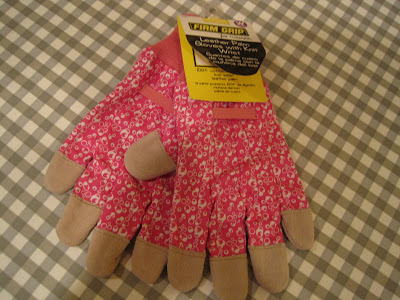 Okay, so I think I changed my mind about the wide paneling for our kitchen walls and cupboards...I put up some of it on the side of a cabinet to see what I thought, and my first thought was that I didn't like it at all! So then I pulled out some beaded board and tried that on a different cabinet, and really like it! I definitely don't like the wider stuff on the cabinets. To me it says "rustic cabin", which is fine if that is the desired look, but I am aiming for a "sweet cottage" look... 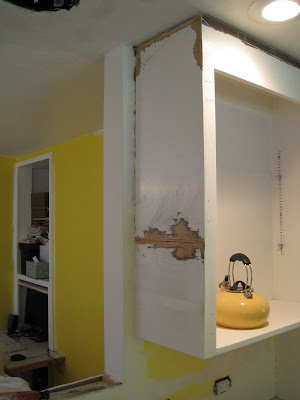 Here is the first cabinet I did. It looks awful, doesn't it? The reason for this is that this is where we had to saw off the other cabinet before we could take down the half wall. You can see in part where the wall used to be. (The hole in the ceiling is where the range hood vented out into the attic. We pulled that old range hood out, and wired in a simple ceiling fan, so we are just "mudding" with joint compound around that hole for the vent.) When we removed the other cabinet, it badly scarred this one, but it didn't matter because we knew we were putting wainscotting over it. I used a chisel and a belt sander to make it a flat surface again, and then we were good to go! (Oh, and in the background you can see a very untidy cabinet over a little work desk...that is the little computer area my husband put in a year ago, and he is making doors for the cabinet. Which is going to be really nice, because it will hide any disorganization in above the desk!) 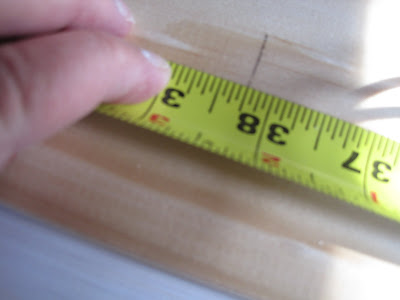 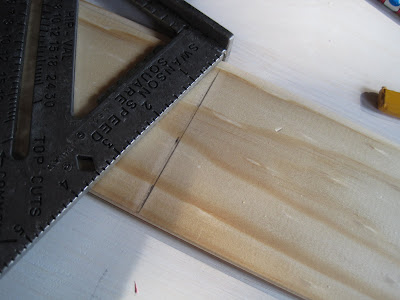 Used "the square" for a straight-edge and drew my little line. It is a bit off, but because I am adding crown moulding to the top of the cabinet, it can be off by a little... 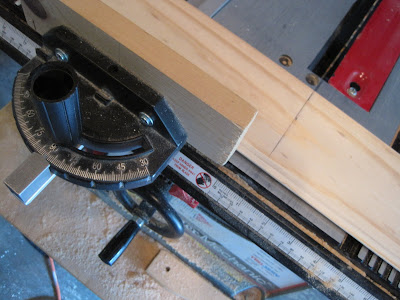 I lined it up with the blade on the table saw... 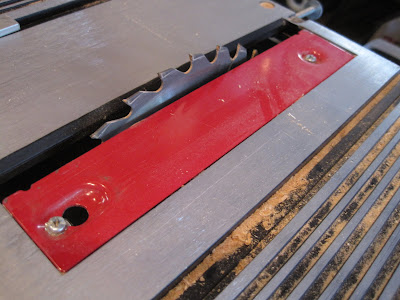 And got a nice good look at that big mean blade...and frankly, I told David I couldn't work up the nerve to cut the board myself! I could imagine losing a finger...or two, or a whole hand or something...so he made me a "cross-cut sled", which makes making cross-cuts on wood SO much easier, and much safer too! 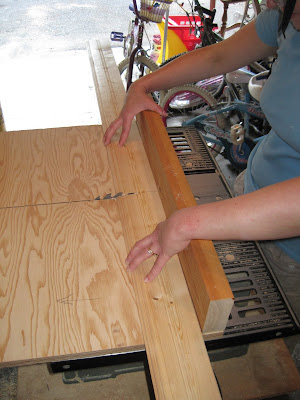 I was still nervous the first time I used the table saw, even with this handy thing, but after I tried it, I couldn't wait to do more! Imagine me, just a girl, actually using a power saw! Yea! :) 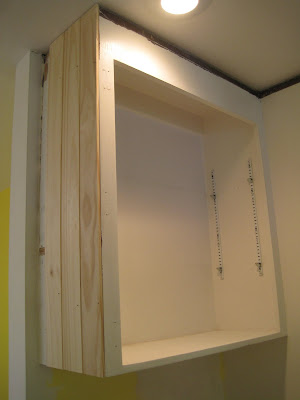 David cut the boards for this cabinet and I put them together and nailed them up. I just really don't like the look of it, though...we didn't even cut the last board for it...


So the next day when David had finished making the sled jig for me, I gave it a try using beaded board this time... 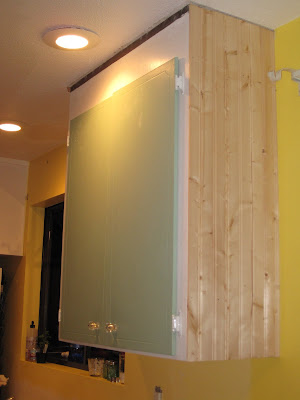 And really liked this look better! What do you think? Whichever we choose will be from floor to ceiling and on the sides and backs of the cabinets, and we will also cover the bottom half of the dining room walls... 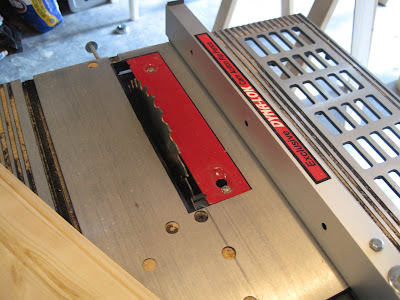 One last thing about this whole learning to use a power saw thing..."Ripping" ~ when you make vertical cuts~ is so much more scary and challenging than "cross cutting"! The third time I did it, I was too timid and failed to push the board all the way through the blade and it shot out from the saw toward me! It didn't hurt, it just really freaked me out! It ruined the wood piece, and really shook me up! But the thing is, I want to learn how to do this too much to just decide it's too scary, so I recut the wood and this time, made fewer mistakes! :) Thankfully, my husband is coaching me through this, and stays right by me when I "rip", wheras I can do it on my own when I make cross-cuts! So just say a little prayer that I'll keep all my fingers here! :0) But the truth is, if you have been wanting beaded board, it is completely do-able! If I can do it, anyone can! And putting it up isn't hard at all! It's actually a lot of fun! :) 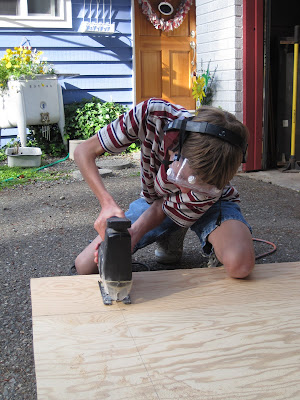 Someone else had fun this weekend learning how to use the jigsaw, and David had fun showing him the ropes! :)

I think you're right to use the smaller board if it's a cottage look you're after. I'm very impressed by your carpentry skills. I can hardly cut straight with scissors! x

wow, the change is spectacular! the cabinet now look polished and beautiful.
oh yes, i would love geting a glove too than a flower.
have a nice sleep, Jen.
xoxoxoxo

The saws scare me too...but there is just something cool about doing it!

So I was right! Bead board did look better...patting myself on shoulder...just goes to say you should always listen to your little sister. (just kidding!) = )

I love it, it looks great and wow, good for you working a table saw. How neat that Junior is helping out too! What a sweet family you have.

I wouldn't use that saw lol! its all looking great though!

lovely to see your boy helping out!

It looks like your kitchen project is coming right along. I have to admit that I like the bead board better!